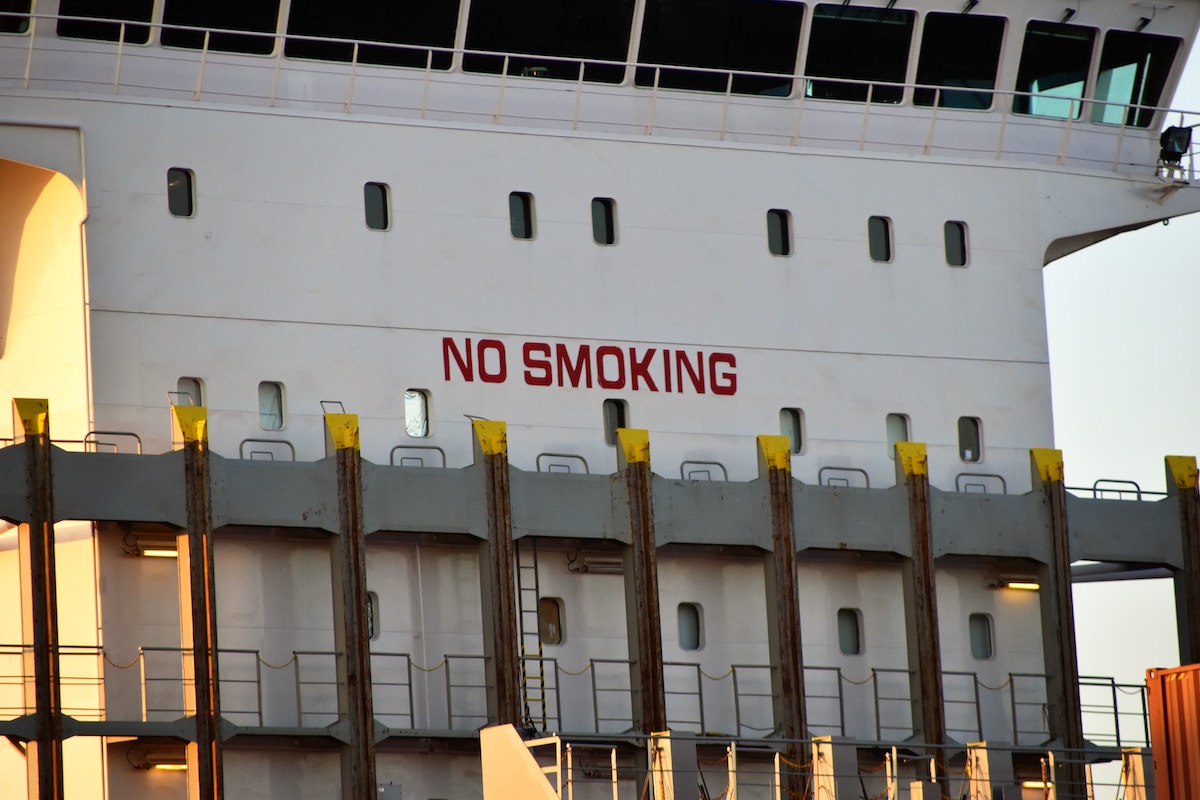 Which Cruise Ships Can I Smoke On

If you’re a smoker going onboard a cruise ship for the first time, it is worth studying the smoking policy of the ship you will be boarding to avoid getting into unwanted inconvenience. Although most cruise ships will allow smoking, most, if not all, have designated spots for you to smoke on … and that is for the enjoyment and welfare of everyone. So, to save you the trouble, here is a list of cruise ships where smoking is allowed.

Azamara ships have designated smoking areas, and you'll easily find them because they are clearly marked. These can be found exclusively on the starboard forward section of their pool decks. All other areas in the ships are strictly smoke-free. Smoking in any of their public rooms, pool decks that are not in the starboard section, restaurants, staterooms, suits, verandas, and halls, are strictly prohibited.

The comfort and enjoyment of Celebrity Cruises’ guests are their number one priority, and this is one of the main reasons why all of their ships are designated as non-smoking. However, they do acknowledge that some of their guests smoke so they allow smoking in specific outdoor areas of their ship. Dining venues, casinos, theaters, lounges, elevators, corridors, and all of their staterooms and verandas are all smoke-free. Violators of their smoking policy are charged with a cleaning fee of $250.

In addition, take note that if tobacco is your preferred thing to smoke, you need to be 18 to be able to purchase it onboard. You can bring cigars, cigarettes, and e-cigarettes with you.


Cunard ships allow smoking, but only in dedicated areas. These can be easily spotted since they are sign-posted. Each of their ships have different smoking areas. For example, you can smoke on open decks on the starboard side, forward side on Queen Elizabeth and Queen Victoria. If you are on Queen Mary 2, the smoking area is inside the nightclub. They have a general policy that all public rooms are smoke-free. Queen Elizabeth, though, is an exception to this rule, since you can smoke on the Churchills Cigar Lounge.

Smoking inside the cabins and the balconies is not allowed, except for e-cigarettes and anything that does not produce smoke. You can smoke them in staterooms as well.

Dream Cruises allows smoking cigars, cigarettes, and e-cigarettes, but only in specific areas. Open decks and all casino areas, both indoors and outdoors, are good choices for smoking. Lighting up in staterooms, restaurants, corridors, and all suites are definitely a no-no. Keep that in mind because violators will be charged a deep cleaning fee.

You also have to remember to stub out your cigars and cigarettes in the ashtrays provided … and make sure they are completely extinguished before you throw them away. Throwing your cigars and cigarettes overboard is not allowed, as this may cause serious fire if the wind carries them back. Also, smoking on open decks and balconies are not allowed during refuelling, due to safety reasons.

Holland America Line used to have a less strict smoking policy, however, as a response to their guests’ preferences, they revised it in 2012. Their current policy doesn’t allow smoking in all indoor public areas including staterooms, except for very few designated areas. Smoking outside the decks and on verandas of staterooms is allowed. It is also worth noting that smoking cigars and pipes is prohibited indoors.

MSC Cruises aligned their smoking policy with the global standards. Smoking areas are fewer than non-smoking areas, and these are properly labeled with signages. Additionally, you will find ashtrays readily available for use in all their smoking areas.

Smoking in cabins and cabin balconies is strictly a no-no, whether you are smoking e-cigarettes or cigars, or cigarettes. Fines are given to people who are caught smoking on non-designated areas. Continuously breaking the rule will lead to disembarkation. Also, throwing cigarette butts overboard is not allowed as this can endanger the people onboard the ship.

There were some updates to NCL’s smoking policy since November 2014 and there were two main changes. Firstly, they are no longer allowing guests to smoke in the stateroom balconies. Secondly, only casino players are allowed to smoke inside their casinos.

If you happen to be onboard their ships Getaway and Breakaway, take note that they only allow smoking on the The Waterfront on the starboard side. However, this excludes the outdoor dining areas. If you are checked in to the Garden Villas, you are allowed to smoke in their private gardens or private sun decks.

All public areas in their ships are considered smoke-free, but they do have some designated areas where people can smoke, depending on what thing they are smoking. For example, those who smoke pipes and cigars can only do so in the Cigar Bar or in a designated smoking lounge. Any indoor venue is smoke-free. It is also not allowed to smoke in any area near venues serving food, outdoor sporting venues, the jogging track, children’s outdoor areas, and The Haven outdoor areas.

Staterooms and staterooms balconies can be used for smoking, however, this excludes smoking cigars and pipes. Violators will be charged a $250 cleaning fee which will be added to their onboard account. Damages caused by a person due to smoking, including cigarette burns on furniture, linens, towels, or carpeting will be charged as well.

When sailing with P&O Australia, smoking is not permitted indoors on any of our ships, including your cabin and balcony. Dedicated outdoor areas are set aside for smoking which will be communicated to you upon boarding. Also note that Electronic cigarettes are also included in this policy and can only be used in the designated smoking areas.

Each ship has designated areas in the open deck where guests can smoke. Take note, though, that these areas change from to time, depending on the weather and the cleaning process. Specifically, smoking inside the cabins, cabin balconies, and in public rooms are strictly not allowed.

Those who are traveling to the United Arab Emirates should be mindful that e-cigarettes are illegal in that country. If you arrive in that country by plane, these will be confiscated in the airport and you will be facing a penalty. If visiting UAE ports is included in your itinerary, remember to not take e-cigarettes ashore.

For safety reasons, it is not allowed to throw cigarette butts or even flick ash overboard as this can cause a fire hazard. It is recommended to use the receptacles and ashtrays provided in the designated smoking areas to completely extinguish the smoking materials.

Each ship has designated smoking areas which are clearly labeled. This comes with sufficient numbers of ashtrays. Examples of designated smoking areas are cigar lounges, a section of the nightclub, and a portion of the open decks. Unlike in other cruise liners, Princess Cruises’ The Casino and Casino Bar are smoke-free areas. This is in exception to specific slot machines where guests are allowed to smoke while playing. Table games, though, are all non-smoking. Other smoke-free locations include show lounges, dining rooms, and anywhere near food venues. The administration also advises guests to proper disposal of cigarettes, cigars, and tobaccos and avoid throwing them overboard to avoid fires. Smoking in balconies and staterooms are prohibited and anyone caught violating this rule will be fined $250 for each occurence. E-cigarettes can be smoked inside the guest’s stateroom but not in the balcony.

All Royal Caribbean ships are considered as non-smoking, however, they have specific smoking areas intended for guests who do smoke.

Smoking cigars, cigarettes, e-cigarettes, and pipes are allowed in designated areas of the starboard side of all their ships, except for Oasis-class ships where guests can smoke on port side of the ships.

Clear and visible signages signify the smoking areas. Ashtrays are also available for use. Take note that areas outdoors that are near food stalls, kids areas, pools, and restricted areas are strictly smoke-free. In the Oasis-class ships, Central Park or the Boardwalk neighbourhoods should be avoided for smoking.

Guests are allowed to smoke in Casino Royale and non-smoking guests can go to a certain area specifically intended for non-smokers. Cruises from China and Hong Kong allowed smoking and will have non-smoking areas in the casino, however, those from Australia and the United Kingdom are strictly smoke-free.

All indoor public places, including food venues, bars, lounges, theatres, hallways, lifts, and jogging tracks are smoke-free. Staterooms and stateroom balconies are also smoke-free. Violators will be charged a cleaning fee of $250.

Like all other cruises, all smoking guests are asked to properly dispose of their cigarettes, tobacco or pipes, and never throw them overboard.

Most public places onboard Seabourn Cruises, as well as verandas of guest suites, are designated as smoke-free. However, if you are only smoking electronic cigarettes, you're allowed to do so within guest suites.

Seabourn Spirit and Legend allows smoking on the private verandas of guest suites - that is, if you are in Categories CS and OW. B category suites don’t allow any type of smoking. If you really need to have a smoke, you can go to the port-side half of the forward observation lounge on Deck 8. They also allow smoking inside, however, you can only do this after 8 PM.

Take note that water-pipes, glass-pipes, and other smoking device are not allowed onboard, so to save you from trouble, better not bring them with you. Electronic cigarettes are allowed however.

Silversea cares so much about the comfort, enjoyment, and safety of all their guests that most of their areas are non-smoking. This includes all public areas, lounges, bars, guest suites, guest suite verandas, and balconies. You can only smoke at Connoiseur’s Corner and in specific lounges, bars, and decks. The good news, though, is that you can smoke your pipes, cigars, cigarettes, and electronic cigarettes.

Note: While every attempt is made to provide accurate and correct information, the information provided is for reference only and policies change which we are not responsible for. For accurate policies please refer to your cruise line's smoking policy usually published on their website or contact them directly.